This weekend we were reviewing an article that has appeared on www.nature.com about the efficiency and potential of the current LEDs in the horticultural market.

Since this article is quite extensive, we have selected and translated several pieces of it so that, in summary, you know the differences between colors and the choice of LED light manufacturers to develop their portfolio. Many of you have asked us on several occasions the objective of having or not having different colors, white light fixtures (full spectrum) or red-blue fixtures (purple light).

The decision to choose luminaires (not at a technical level) will be due to several factors, which include:

Light-emitting diodes (LEDs) have allowed a historic increase in the conversion of electrical energy to photons, but this is close to a physical limit. The maximum theoretical efficiency occurs when all the input energy is converted into energy in photosynthetic photons. Blue LEDs can be 93% efficient, phosphor converted “white” 76% efficient, and red LEDs 81% efficient. These improvements open up new opportunities for horticultural lighting. Here we review the fundamental physics and efficiency of LEDs, the current efficacy of LEDs, the effect of spectral quality on crop yield, and the potential efficacy of horticultural LED fixtures. Advances in photon conversion in yield can be achieved by optimizing spectral effects on plant morphology, which vary between species. In contrast, the spectral effects on photosynthesis are remarkably similar across species, but the conventional definition of photosynthetic photons (400–700 nm) may need to be modified. The upper limit of the effectiveness of the LED device is determined by the effectiveness of the LED package multiplied by four factors inherent to all devices:

The term efficiency is applied to ratios with the same units in the numerator and denominator, which can be expressed as a percentage. LED efficiency describes the lowest optical output divided by the electrical power input (Watt / Watts or %). The term effectiveness is applied to relationships with different units. In horticultural lighting, efficacy refers to micromoles of photon output per second, per watt (W) of input power. Since one watt is one joule per second (W or J * sec), this simplifies to μmol per joule.

The relationship between photon energy and wavelength is expressed in the Planck-Einstein relationship, often called the Planck equation. This equation states that energy is inversely proportional to wavelength (E ¼ hc λ). This equation is used to convert between efficiency and efficacy, and is used to calculate the maximum possible photosynthetic photon efficiency for a given spectrum. By converting the efficiency of the LED into efficacy, we obtain the appropriate units to determine the impact of photons on plants by input electrical energy. This follows another

The physical law called the Stark-Einstein Law, which states that for each absorbed photon, only one molecule can react. This Law can be reformulated to say that a photon excites an electron. In this document, the efficiency of photons is limited to photons between 400 and 700 nm, except for far red LEDs, where photons up to 800 nm are included. LED package manufacturers often report efficacy in lumens per watt (watt), because this is a significant metric for human lighting, but not applicable for horticultural lighting because it is a photon-weighted measure for human vision in function of the response of the human eye to different colors.

The fundamental efficiency of LEDs (LED packages) is the product of the following three sub-deficiencies:

White LEDs will also incur phosphor conversion losses, which will be discussed later in the document. For a more complete description of LED efficiency. Incremental improvements have been made to each of the three factors above, resulting in a substantial improvement to LED packages in the last 10 years. Now the red, red, white and blue LEDs, respectively, can be 77, 81, 76 and 93% efficient

White LEDs consist of blue LEDs with a coating of luminescent material (for example, a phosphor material, typically Y3Al5O12: Ce) that absorbs photons and blue luminescences at longer wavelengths. White phosphor conversion LEDs are designed to transmit some blue photons, with the rest being converted to longer wavelengths. The types and amounts of phosphor vary to create multiple shades and qualities of color. Figure 1 shows a general relationship between correlated color temperature (CCT) and the percentage of blue photons (400–500 nm).

Commonly used terms for associating names with color temperatures are warm white (2500–3500 K), neutral white (3500–4500 K), cool white (4500–5500 K), and daylight (5500–7500 K). A lower CCT (2700-4000 K) and a higher CRI (greater than 80) are often preferred for indoor lighting to provide incandescent light qualities for humans. Increasing the density of phosphor coatings and increased use of red phosphor materials decrease efficiency. A 6500K LED (daylight) with about 30% blue photons can have 95% of the photon output of its blue LED counterpart without phosphor conversion, but this value drops to 80-85% for a white LED warm with 10% blue photons.

Also, as the optical output of the white LEDs increases, the efficiency of the phosphor will decrease. This is due to conversion, energy, and optical losses within the phosphor conversion process. 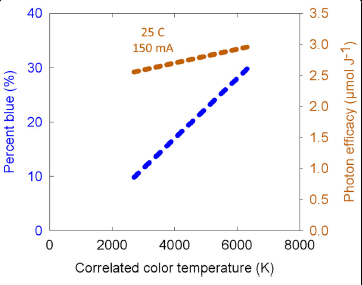 Photons excite electrons and therefore photobiology is driven by the number of photons, not energy or lumens. Biologically active photons must have sufficiently high energy to excite pigment photoreceptors, and there are multiple photoreceptors with weighting functions for wavelengths, which are derived biophysically or empirically. Lumens are an example of a weighting function applied to a photon flux and spectral distribution for human visual function.

The effect of spectral quality on plant shape is synergistic between wavelengths, interacts with intensity, varies between species, and can vary during the life cycle of the plant.

However, some principles applies to all species. Spectrum impacts on plant growth and development are much greater in single source lighting than in supplemental greenhouse lighting where electric lighting constitutes only a small part of the plant lighting diet. In plant biology, spectra are traditionally separated into the following general categories.

Ultraviolet photons are divided into three broad categories: UV-C (100–280nm), UV-B (280–315 / 320nm) y UV-A (315 / 320–400nm). The wavelength at which UV-C and UV-B rays separate (280 nm) is determined by the shortest wavelength of solar radiation reaching the Earth’s surface. The wavelength at which UV-B and UV-A rays (315 or 320 nm) separate is generally determined by the effect of the sun on human skin sunburn (315 nm) or skin cancer ( 320 nm). There is no universal agreement on the wavelength transition between UV-B and UV-A, both are used equally. Fortunately, UV-C photons are completely blocked by our atmosphere because they are very harmful to biological organisms. UV-B photons are also harmful, but they can have beneficial effects, including increased production of secondary metabolites. UV-A photons are less harmful than UV-B and can have stimulating or inhibitory effects on plant growth, depending on the species and the interacting environmental factors.

Based on McCree studies, PAR only includes photons with wavelengths between 400 and 700 nm. However, McCree’s studies show significant differences in the photosynthetic efficiency of the species at wavelengths less than ~ 425 nm. Some species, such as radish, have the same photosynthesis between 375 and 500 nm. Photons between 350 and 400 nm can be photosynthetic, but a high fraction is typically absorbed by non-photosynthetic pigments.

Blue photons (400–500 nm) reduce plant height and leaf spread in almost all species. Due to absorption by inactive pigments (eg anthocyanin), blue photons are ~ 20% less photosynthetically efficient than photons in the more common red LED (660nm). However, blue-induced decreases in leaf area (reducing photon capture) may have a greater effect on overall plant growth than blue-induced reduction in photosynthetic rate. A range of 5 to 30% blue is typically used in horticultural LED installations to inhibit excessive stem extension and reduce plant height, which is generally beneficial for growth in a controlled environment.

Green photons (500–600 nm) enhance human perception of color. Unfortunately, direct emitting monochromatic green LEDs (without phosphor conversion) have low efficacy. White LEDs (phosphor converted blue) are used to provide the green photons that are important for human vision; and they have the added benefit of providing blue and red photons. Green photons are up to 10% less photosynthetically efficient than photons in the more common red LED (660 nm) 26,27, but penetrate deeper into the plant canopy than blue or red photons. The effect of green photons on plant shape is generally much less than the effects of distant blue or red photons. Studies in Arabidopsis suggest that green photons can reverse the effects of blue photons (eg, inhibition of hypocotyl elongation) or induce shade avoidance (eg, increased stem elongation, reduced branching).

Some studies suggest that green-induced shade avoidance also occurs in food crops and other economically valuable plants, but several other studies have shown minimal effects.

Red photons (600–700 nm)are well absorbed by leaves, are photosynthetically efficient, and are efficiently generated by LEDs, which is why they are widely used in horticultural facilities. The classic paradigm has been that red and crop act antagonistically to inhibit or induce shade avoidance symptoms, such as stem elongation, leaf orientation hyponastia, or reduced branching.

However, the high absorption of red photons by chlorophyll means that the impact of red on shadow responses can be overestimated. Replacing green photons with red photons has minimal effects on plant shape, but plants that grow in the complete absence of red and green photons (single-source blue LEDs) they can lengthen quickly.

The far red photons (700–800 nm)can have powerful effects on plant shape, and are efficiently generated by LEDs, making them a promising novelty in horticultural lighting. In some species (especially lettuce), far red photons beneficially increase leaf spread, but also significantly increase stem elongation in many other species, which can be counterproductive.

Despite the classical definition of PAR, recent studies indicate that far red photons (700–750 nm) are photosynthetically synergistic with shorter wavelength photons. These photons are being considered for their role in photosynthesis. Distant red photons should be used with caution, particularly in single light source environments, because they can induce stem elongation associated with shadow avoidance. 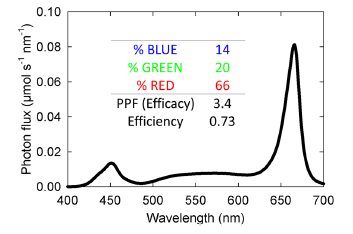 Although the efficacy of the luminaire is paramount, the time and angular delivery of photons to the photosynthetic tissues, spectrum and intensity also determine the effectiveness of the photon delivery system. Consequently, efficient lighting is combined with optimal temperature, humidity, nutrition, plant water potential, atmospheric carbon dioxide concentration, oxygen supply to root surfaces, and genetics. 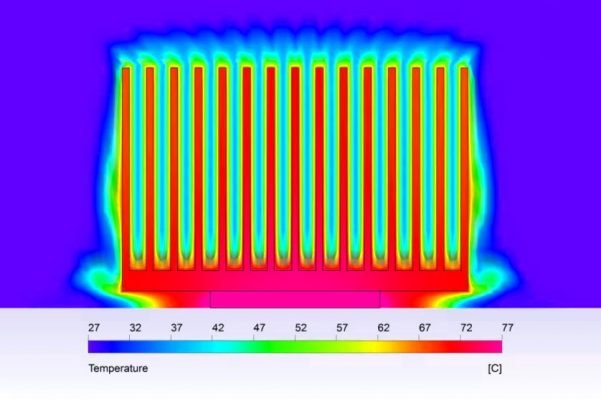